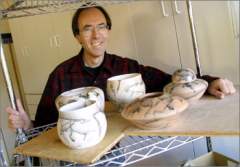 I’ve been working with pottery since 1997. At first, I created basic bowls, mugs, and other utilitarian objects, using classic glazes in blue, white, and green. Over time, I’ve been drawn to the colors, textures, and motifs used by Native Americans and other “primitive” artists around the world. Some of the symbols and motifs I use in my pottery first appeared in cave paintings and rock carvings over 30,000 years ago. For me, there’s a deep resonance in working with these ancient symbols.

As my work has changed stylistically, I’ve also become less tied to high-fire glazes. I often use stains based on iron, copper, and other natural coloring agents. Much of my work is not glazed at all. Instead, I fire the work in a raku kiln or a pit-firing, letting the flames and the clay work their magic. These pieces are sometimes called non-functional ware, because they will not hold water and are not food-safe. However, native people used unglazed pottery to store seeds, grain, and pigments. (While I hope that my pots can be appreciated simply as works of art or ceremonial objects, they can also be used for practical purposes such as holding spare change, pens and pencils, or dried flower arrangements.)

I work in California’s Silicon Valley, which is rich in artistic resources. Although the actual process of creating pottery can be a solitary pursuit, I’ve been fortunate in finding a community of artists to work with and learn from. In particular, I am grateful for the help and encouragement of my friends in the Sunnyvale Artists’ Cooperative and the Orchard Valley Ceramic Arts Guild, as well as the many folks on the Clayart mailing list.